Street photography is first of all a real life around

Our daily life and people as they are, are just two reason to tell stories.

The moment caught in such a photo remains suspended in Time.
Sometimes we return hypnotically to some emblematic images.
Photo Module 3 is dedicated to this way of being more attentive to the world around us.
The indiscretion of street photojournalism is offset by empathy towards the people near us to whom you are guided by such images.
At the end of the photojournalism course, go shoulder to shoulder with Aurel on the street that loves you!

This photo collection is made in honour to Henry Cartier Bresson, called *The father of modern street photojournalism* in wikipedia.

Rainy Saturday on a beach 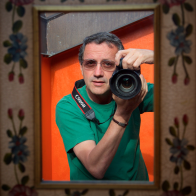 Aurel Virlan - 22 May 2018
Photo tour guided in the Danube Delta Photo workshop with four teams, each with a different theme I have been invited by a big insurance company...